Doolin, Ireland - Arriving In County Clare And Visiting The Cliffs Of Moher 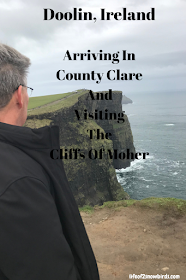 Me, Soko, my sister Sandie and her husband JT were driving down to Florida together in August of last year.  Some time during our ten hour trip, out of the blue, Sandie asked us if we wanted to go to Ireland in February, when she had a week off from her job at a nursery school.  She had been looking at a website, http://www.authenticireland.com, and she said it would be very inexpensive to take a vacation there at that time of the year.  Of course we would love to take a vacation anywhere and everywhere any chance we can get but we have to be very conscious of our retirement budget so expensive is not a vacation we can even consider these days.  But, we were very interested in going when we heard the word "cheap".   On our ten hour return trip back from Florida, we were working with an wonderful agent, Jocoya Fox-Jones, and booking a 7 day vacation to Ireland.  She found us  accommodations in Doolin, County Clare, took care of reserving a rental car and booked a couple of excursions in the area for us.   We had 6 months to plan the rest of the vacation.

The day finally arrived for us to board an Aer Lingus plane that would take us to Shannon Airport in Ireland.  Of course I had to Instagram to let everyone know that we were at JFK Airport in Queens, NY.  Two minutes after I clicked send, I get a text from our friend, Heidi, asking what gate we were at?  Two minutes after that we were taking pictures with her at the airport.  She was on her way to Washington to visit her daughter.   It was crazy that in an airport as huge as JFK, that she was only a couple of gates away from us. 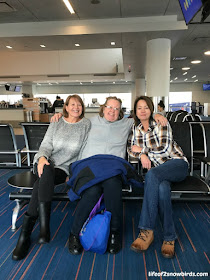 In about 6 1/2 hours we arrived at Shannon Airport.  It was only 8 AM so we had the whole day ahead of us.  The first thing we had to do was find our rental car.  The next thing we had to do was figure out how to get out of the airport.  We found out, immediately, that there are lots of roundabouts in Ireland.  Maneuvering around roundabouts is very difficult when you (Soko) are trying to figure out how to drive when you are sitting in the passenger seat of a car and driving on the wrong side of the street,   We wound up going around and around in circles and got to a point when we thought that we would never get out of the airport and that it would be all we would ever see of Ireland. 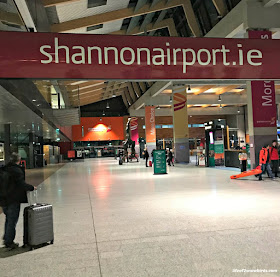 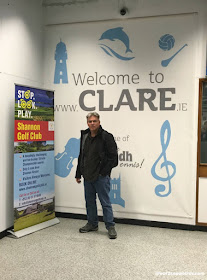 We did finally find our way to the highway and headed to Doolin where we would be staying for the week.  We called the host of the Atlantic View Cottages, TJ, and found out that he was expecting us to come in a little later that day.  It was going to take him a couple of hours to drive over to let us in but that was fine with us.  There was a full kitchen in the cottage and we wanted to buy some groceries and Guinness.  We went to the Super Valu in Ennistymon, which was 12 minutes from where we were staying.   We wound up shopping here almost every day.  We kept running out of Guinness! 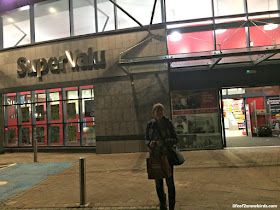 After shopping, we still had plenty of time before we had to meet TJ at the cottage so we went into the little town of Doolin to get breakfast at one of their three pubs.  The breakfast we had a Gus O'Connor's Pub was so delicious, and the atmosphere was so cozy, that we decided that we would definitely be eating here again. 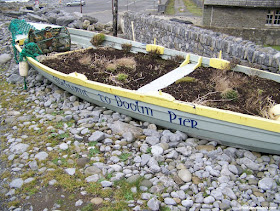 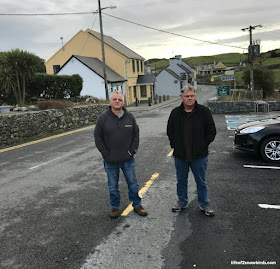 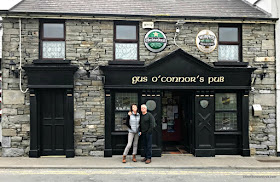 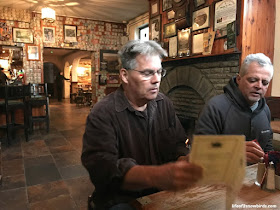 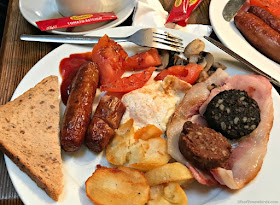 Sausages, tomato, fried egg, fried potatoes, mushrooms, black and white pudding and bacon.  (We wondered why we didn't get bacon until we realized the ham was the bacon.  We learned, by the end of the trip, that if we wanted bacon we would have to order rashers.)

After our delicious first meal in Ireland, it was time to meet our TJ.  He gave us keys and showed us around our adorable 2 story, 2 bedroom, 2 bath home for the week. 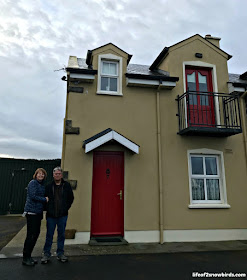 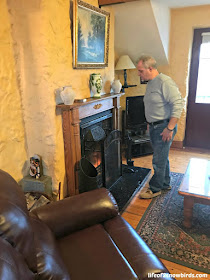 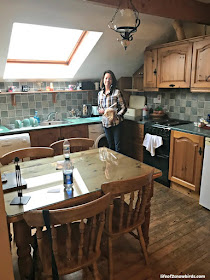 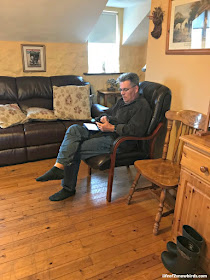 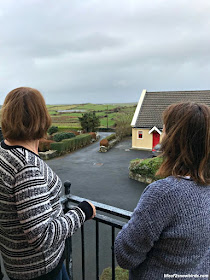 The balcony was a perfect place for me and Sandie to enjoy the spectacular view.

We unpacked and put groceries away and we were now ready for a short 10 minute drive to see one of the most popular tourist spots in all of Ireland, the Cliffs of Moher. 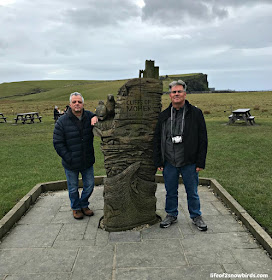 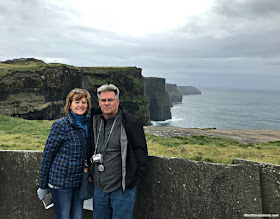 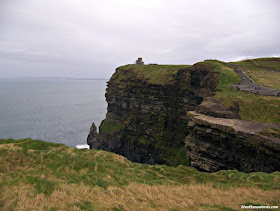 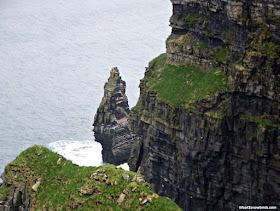 There's a plaque, at the bottom of the trail that you take to get up to the cliffs, that is dedicated to all the people who have lost their lives falling off of them.  But you still see people who will walk out behind the protective waist-high fence to get closer to the edge. 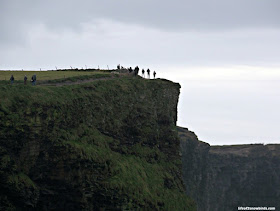 One person, in our group of four, didn't pay any attention to the plaque, didn't listen to what TJ was telling us about a recent casualty involving someone trying to take a selfie of themselves on the edge of the cliffs and didn't care that I was yelling that she was giving me a heart attack!   Sandie was on the wrong side of the fence for a split second and she made it back fine, but I still think staying behind the fence is the best way to walk along the edge of these 700 foot cliffs. 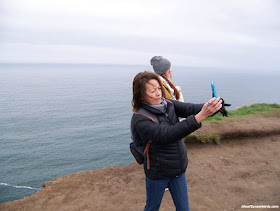 Sandie and JT were a little ahead of us as we left the cliffs and were heading to the Visitor's Center.  When we caught up to them, we saw them outside the building talking and laughing with a young couple. The couple were friends and neighbors of Sandie and JT.  We were starting to wonder who else we would just happen to bump into on this trip. 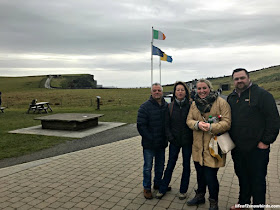 One thing I researched before we set off for Ireland was where we could go to mass.  We are Catholic and go to church every Sunday, or Saturday evening.   If we are on vacation on the weekend, we can always find a church to go to, thanks to Google.  We really enjoyed the masses we went to in Barcelona and Venice last year.  We could not understand a word the priest was saying, but the order of the Catholic mass is the same in every country so we knew what was going on.

We found a Saturday evening mass that would work for us and the church, Immaculate Conception, was in Lahinch which was not far from us.  The mass was wonderful and we could understand every word.  What we didn't notice, until after mass when we ran across the street to the small grocery store, was that there was a pub attached to the church.  This is not a sight we have ever seen and I'm sure we will never see again unless we visit Ireland again! 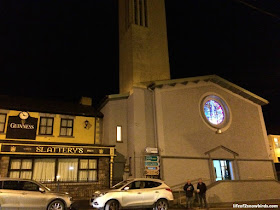 Going to church was the last item we had on our itinerary list for the day.  Now, after a long, hectic but really fun first day in Ireland, it was time to get back to the cottage to relax. 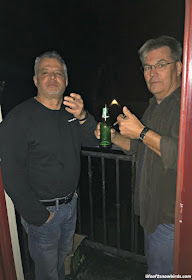 The balcony was a perfect place for Soko and JT to end every evening with cigars and beers!

Stay tuned!  We'll let you know how inexpensive this trip was in our next post.